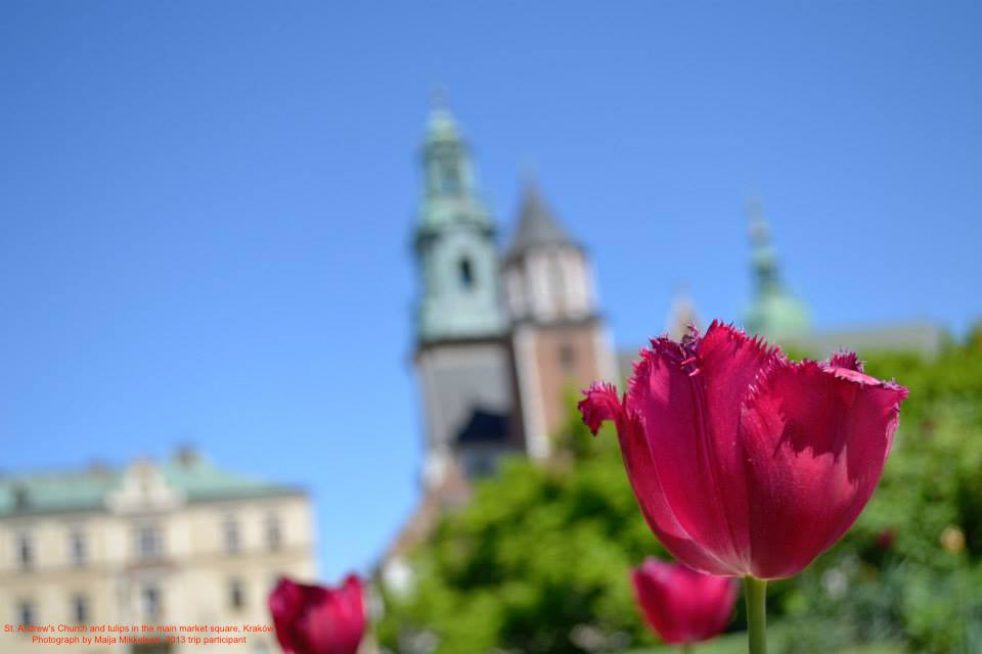 Today we had our first lecture from Dr. Wright in Poland. We discussed political ideologies to start and then moved on to Kazimierz (which I am still working on how to pronounce correctly). Kazimierz was the old Jewish district in Krakow that was left empty following WWII because the Jewish population was murdered and those who survived the Holocaust faced antisemitism in Poland, so they did not stay. So for quite some time, this area was empty but was occupied again by younger people and now it is a very popular club scene. In the lecture, we talked about how the businesses in the district are run by Poles, so why is this? From our reading we learned that people are skeptical, both Jews and Poles. Jews can feel as if Poles are taking advantage and supporting a “Holocaust Industry.” This idea creates a polarization, a Pole cannot be Jew and a Jew cannot be a Pole. And this all is related to Polish identity. There is the idea that being a Pole is being Catholic, that is their identity, which makes sense with Poland’s history. When speaking Polish was illegal and when borders changed, how did people know their nationality? For Poles it is Catholicism.

It is not uncommon for Poles to never encounter a Jew. So why is Kazimierz so important? It creates a safe space for Jews, where a Jew can wear a Kippah or Star of David and not feel scared. Where Jews can learn about their history and celebrate Jewish life. So much of the narrative of Poland and Jews is about the Jewish deaths and concentration camps, but this is an area where can explore and think of the world prior to the Holocaust. This is also good for Poles, they can meet Jewish people and they can share stories and that can be good for reconciliation. Then being Polish can shift so that being Polish does not have to mean being Catholic.

Following our lecture, we went to Kazimierz. It was a short walk from our classes and we enjoyed the beautiful weather. There was a Synagogue that was still in use and big, beautiful and ornate. Right next to the Synagogue was a Jewish Community Center, which is very important for Jews to gather, learn and celebrate. We also passed a Mikvah, which a ritual bath used by Jews, this was in a hotel that flew the Israeli flag. We passed a few Jewish restaurants and then a Holocaust remembrance site. The remembrance plaque was adorned with stones, a per Jewish custom. We then headed for lunch, the bagel shop was too busy to accommodate a group our size. So we headed to a food truck area, where I found my new favorite food, French tacos (there were French fries in the taco, it was amazing). Then we went to the Galicia Jewish Museum which was unfortunately closed for a private event. But luckily the gift shop was open so I got a beautiful Star of David necklace and a ring with Hebrew inscription. The most emotional moment of the day was heading to the Empty Chairs memorial. There was a whole square that was empty except for large chairs spaced out in the area. Our tour guide explained that this is where Jews would be lined up to be taken from the Ghetto to a concentration camp. The empty chairs represent what was left in the Ghetto, nothing except the belongings of those forced out of their homes.

As a student of political science, I am very conflicted as to how I feel about Kazimierz. On one hand, it is important to remember Jewish life in Poland beyond just the Holocaust. But it felt to me like gentrification. Jewish life is more than just hummus and bagels and I wanted to see more Jewish culture in Kazimierz. For hundreds of years, this is where the Jews lived and I do not think it should be reduced to a club scene with Jewish culture on the sidelines. On the other hand, I am glad that Jews feel like they have a safe place to be in Poland.

Tomorrow we head to Auschwitz, which is already a bit nerve wracking. I do not know how to prepare for what I will see and feel tomorrow. I think it will be very interesting to see and analyze how things are phrased and put, because the Poles view the responsibility for the Holocaust differently than Americans. And right now I am converting to Judaism so I feel as if I will be seeing Auschwitz in different lens that I would have if I was just visiting as a student or tourist. So I am very excited and nervous to see what tomorrow brings.

View all posts by wittpoland2018